Hathorn is in her fifth season at Loomis, and so far the 2022 season has been a great one for the program. The Pelicans own a record of 8-0-2 with six regular season games remaining before the NEPSAC Class A playoffs. Last week, the team earned a big 1-1 draw against fellow Founders League power Miss Porter’s.

Hathorn also has more than 10 years of college soccer and club coaching experience. She has worked at Northern Arizona University, Regis University, Valparaiso University, the University of Maine and Iona College.

Hathorn joined host Matt Langone to discuss why Loomis has been playing so well this fall, and her own personal playing experiences.

Here are some highlights from our discussion with Hathorn.

On the key to the team’s success:

Hathorn: “It really comes down to we have some very strong players, but it’s how the team has come together. They love competing with each other and having fun together, which makes our training sessions really high energy, really competitive. But, also, they’re enjoying it and they’re pushing themselves and each other so much harder.”

On the program’s identity:

Hathorn: “It’s always been a part of the team, but the sense of family and respect amongst the group, and values that they play on — that they place on each player. … It’s really about being a part of that family and understanding that each player has value and a way to impact the game and the team in their own way.”

On Miss Porter’s being a rival Founders League opponent:

Hathorn: “I’ve coached a good number of the players on the Porter’s team, when I was coaching club. Our players are teammates in their club seasons, and so I think when you add in that personal connection, that desire to not do badly — I don’t want to say it’s the desire to do well, I think it’s the desire not to do badly or to do poorly. It adds pressure that doesn’t need to be there, and then when we play tight, we don’t play our best, right? We force things we wouldn’t normally force. We make mistakes where we’d normally be very relaxed. So that one I think is just more of a mental game for us.”

On her approach to coaching prep school soccer, as opposed to college soccer:

Hathorn: “I view high school soccer, prep soccer as a very high level, but a place where the players can have a little bit more freedom to figure out who they are, where there’s less pressure. Less pressure than their club environment, maybe, because that’s where primary recruiting is coming out. We get recruited out of prep for sure, but the major tournaments in the recruiting cycle (are in club season), because fall is high school and college soccer season. What they do here during their fall is what sets them up for their club season, so I like to give players a lot of freedom here, where they wouldn’t necessarily have had that much freedom at the college level.”

On why she chose to play at Maine:

Hathorn: “It was the offer I got, I’m not gonna lie. I played up two years in my age group, so I was a 16-year-old playing on the 18s. I didn’t get recruited as many of my peers did. Maine ended up being the best spot for me, because I had the freedom to be the player I wanted to be and had a really phenomenal career there and a good relationship with my coach, who I ended up then going back and being an assistant with him later on.” 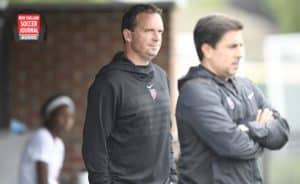