The New England native, who attended Belmont Hill School, has become synonymous with the Revs over the past two decades as the broadcasting voice of the franchise.

The Revs, however, missed the MLS playoffs this year with a final record of 10-12-12. Also, earlier this year, the MLS announced that Apple TV will be the home to all of the league’s matches globally for 10 years, starting in 2023, meaning there will no longer be local television broadcasts.

Feldman joined host Matt Langone to reflect on his years as the voice of the Revs, the 2022 season, and what the future may hold.

Here are some highlights from our discussion with Feldman.

On the Revs missing the playoffs after last year’s record-breaking success:

Feldman: “It’s kind of an empty feeling after the Revs made the playoffs the previous three years under Bruce Arena. It was a real contrast from 2021, where everything seemed to break right. You set the record for one-goal victories, and then this year they led the league in points surrendered for winning positions. I think that you certainly create your own luck.”

On if losing in a penalty kick shootout in the playoffs last year negatively impacted the Revs this year:

Feldman: “They just came out and looked stale and wooden, and not the team that had blown through the schedule in the regular season (last year). I think there was a hangover, and then it’s been talked about and written about a lot, but it was a disjointed stop-start sort of a preseason, having the Cavaly AS series (in the Concacaf Champions League) canceled because (Cavaly) had to withdraw from the competition because of funding and logistical issues. You can understand it, but that was meant to be almost part of the Revs’ preseason, and it just cascaded from there. Like everything that kind of could have gone wrong, went wrong.”

On the emotions of signing-off from a Revolution broadcast for potentially the final time:

Feldman: “Definitely emotional, and we did it again in Chicago. We wanted to do a sign-off after the last home game, because the home technicians, and production people, and operations people at the stadium are such an integral part of what we and I have been doing. And then we did it again in Chicago. … I think back across the years, and my overwhelming emotion that I feel is gratitude. I’m not trying to be glib or corny in any way, but if it does all end here, I feel incredibly fortunate to have had the opportunity to be the voice of the hometown club in the sport that I love.”

On the importance of local broadcasts over the years in the MLS:

Feldman: “I would say, generally, it’s very important and that there will be something lost. There will be some sort of, like, radio syncing option, so fans can get some of that, but those details will continue to evolve, but it will be a feature. So, it’s not like the local announcing component is going away. But for television, I think it’s been an important part of the history. And I think someday, whether it’s ESPN or somebody else, does the 30 for 30 or the sports century on the early years of the league, those calls are gonna be integral.”

On the growth and evolution of the MLS:

Feldman: “The cohesion of the games is much better. Did I think it was gonna become La Liga or the Premier League by Year 27? No, I never thought that. Quite honestly, one of the things that annoys me is when I’m in a soccer pub and whether I’m just eavesdropping or I bring up what I do and people say, ‘you know, MLS is blank.’ And I’m, like, ‘dude, you don’t do anything in your life as well as the worst guy on an MLS roster.’ If you knew what these guys put into this and also if you really went to one training session. There are all these guys playing Sunday League who played a week of semipro when they were 22, who then are like, ‘Oh yeah, I could play.’ No, you couldn’t. I’ve seen you play and you couldn’t.” 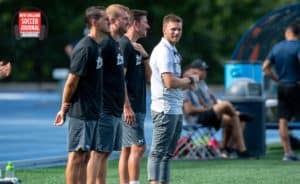