Three years ago, when Ru Sweeney was a coach for the Acton-Boxborough (Mass.) High School boys team, he watched Maya Mathis play for the girls’ side.

Mathis was a freshman on the backline, but Sweeney wondered how she’d fare in more of a playmaking role. Funny enough, when Sweeney became the girls’ coach in 2020, he learned Mathis had the same idea.

"(I was) just thinking to myself where would you play her -- she’s one of the better players even as a freshman," Sweeney said. "When I took over, I started her in the midfield, and we had a conversation before the year. She’s like, 'Is there any way I can not play center back?'" 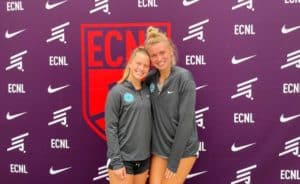 Recruiting: How teammates at BB&N and FC Stars will become D1 college rivals

Sophia Recupero (Hopkinton, Mass.) and Caitlin Mara (Winchester, Mass.) have gotten quite accustomed to seeing each other on the soccer field in the same uniform.…
Read More MIAA power rankings: Who is at the top in each division in state?