The rosters are set for the 2021 High School All-American Games.

New England will be well-represented at the annual contests, which will be played on Dec. 11 at Bearden High School in Knoxville, Tenn. The day will feature a boys game and girls game, in which the East plays the West.

Eight players from the region (out of 43 nationwide) were selected to play in the boys game, while six players from New England were chosen (out of 42 nationwide) for the girls game. That includes a combination of players from NEPSAC programs and private and public high schools. One of the two coaches for the East girls side will be Glastonbury (Conn.) High head coach Mark Landers, who won over 300 games and eight state titles as the Glastonbury boys coach before switching over to the girls program this fall.

Here are the players selected to play in the prestigious annual matches. 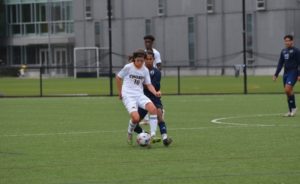 Editor’s note: This story appears in the September-October issue of New England Soccer Journal. What Nico Mangiafico may lack in size, he makes up for…
Read More Elizabeth Finn (Scituate, Mass.) found exactly what she was looking for in a college destination in the University of New Hampshire. That’s why the talented…
Read More
Advertisement