Cyle Larin and Brian Wright followed parallel soccer paths, growing up in the Toronto area and collegiately in New England.

Larin has been ahead of the game, becoming a No. 1 SuperDraft choice and MLS Rookie of the Year in 2015 with Orlando City SC, then securing a sizable transfer to Besiktas in Turkey. Wright kept a lower profile, becoming the second-leading scorer in Catamount history (39 goals in 80 games), then being selected No. 20 in the 2017 SuperDraft by the New England Revolution.

But Wright took a step toward catching up last week. 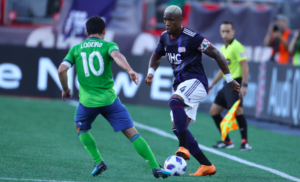